Nestled along Commencement Bay and flanked by Tacoma on three sides, Ruston resides as a pearl. The City of Ruston is a quaint and vibrant example of small town America. Ruston is a city steeped in pre-Washington State history with deep roots and families that have lived there for generations, including the Puyallup Indian Tribe who inhabited the general Commencement Bay area and used its shores to fish. 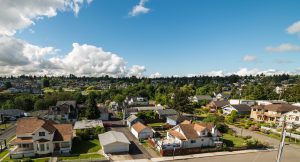 From its inception as a camp along the shores of Commencement Bay, Ruston grew into a town built on the smelting industry that has evolved into the present self sustaining City of Ruston. With a 2010 population of 749 (US Census) and estimated 2035 population of 1,608, Ruston is primarily a residential community.

Land naturally slopes down to the shores of Commencement Bay where new residential and commercial development is occurring. This area, formerly known as the American Smelting and Refining Company (ASARCO) site, opened in the late 1880s has ceased operations and vacated. In accord with federal clean up, the area is now home to a developing community of mixed uses, including multifamily residential, commercial, and recreational opportunities.